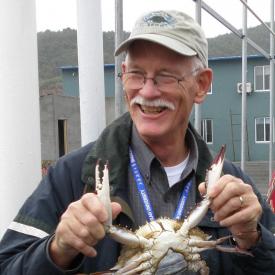 Oceans and coastal ecosystems support an incredible diversity of fish and invertebrates that have sustained human societies for millennia through fisheries and aquaculture. These species are key players driving ecosystem structure and function, but human activities threaten the productivity and diversity of marine life. In the Anthropocene, finding a balance between harvest and conservation of fish and invertebrates, and mitigating other human impacts on marine ecosystems, will be key to sustaining productive, resilient, and biodiverse coastal and marine ecosystems. We address broad problems of population and community ecology using long-term quantitative sampling, animal behavior/movement studies, and innovative experiments at multiple spatial and temporal scales. Our studies analyze human impacts and natural change in freshwater, estuarine and marine systems.

Posted by KristenM on November 1st, 2018

Article contributed by the University of Maryland Center for Environmental Science

Using environmental DNA (eDNA) to track the presence of fish in waterways is emerging as a powerful tool to detect and understand the abundance of species in aquatic environments. However, relatively few studies have compared the performance of this emerging technology to traditional catch or survey approaches in the field.

Researchers from the University of Maryland Center for Environmental Science and Smithsonian Environmental Research Center field tested using eDNA—tracking the presence of fish by identifying DNA that has been left behind in the water—to detect river herring in tributaries of Maryland’s Chesapeake Bay. They found that tracking and quantifying herring DNA from the environment corresponded well to more traditional field methods and has great potential to assist future monitoring efforts of river herring abundance and habitat use.

“Sampling a single river, you need a net, crew, permits, it can be expensive,” said study author Louis Plough of the University of Maryland Center for Environmental Science. “The eDNA approach is an alternative where you just take water and you get an idea of the abundance of fish.”

Accurate information on how many fish are in a river system and where they travel is essential to understanding their ecology and how to manage the fishery in increasingly human-impacted environments. Environmental DNA (eDNA) sampling has recently emerged as a powerful, non-invasive alternative to capture-based techniques to detect the presence of a species in their environment.

“You can scoop up water and know what’s been there,” said Plough. “It captures a snapshot of the DNA that has been around in the past couple of weeks.” 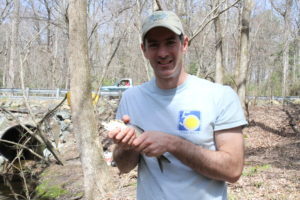 The researchers developed a genetic probe that targeted and identified the DNA of two particular fish species, alewife and blueback herring, collectively known as river herring, in the waterways. As they swim, the fish slough off cells and waste that contain DNA.

“The eDNA method is especially powerful because it can identify whether alewife, blueback herring, or both species are present at each site,” said study co-author Matt Ogburn of the Smithsonian Environmental Research Center. “When we use some traditional methods like collecting fish eggs or larvae, we often aren’t able to tell which river herring species they belong to, and they might even be from other local species like hickory shad.”

River herring, the common name for alewife and blueback herring, were once common in Maryland’s rivers, where they came to spawn every spring. One of the oldest fisheries in North America, they play important roles in coastal food webs—striped bass, bald eagles and osprey like to snack on them—yet the species has declined sharply since the 1970s due to loss of spawning habitat, overfishing, and degradation of water quality.

“These species live in saltwater and spawn in freshwater every spring. They’ve been hit hard by overfishing and habitat loss, including dams that blocked their way to spawning grounds upstream, so numbers have declined,” said Plough. “We need to conserve them, they need help, but it’s expensive to monitor them.”

The team sampled 196 locations across 12 tributaries in Maryland—nearly 500 waters samples—in an effort to understand where they are and how many there are. 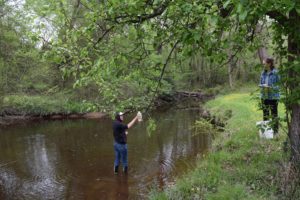 The researchers are among the first to use eDNA across the Chesapeake Bay watershed to create a map of where river herring are spawning.

“The only other large-scale surveys of river herring spawning habitats in the Chesapeake Bay watershed were conducted in Maryland and Virginia from the 1960s to 1980s, and different methods were used in each state,” Ogburn said. “Our study is the first to use the same method across the watershed, which allows us to study habitat preferences at an unprecedented scale.”

“The goal is to do more of this with other species, using new tools to inform conservation and restoration efforts,” said Plough.

Understanding the ecology of fisheries is critical to maintaining resilient, productive and biodiverse coastal and marine ecosystems. Fishing is an important sector of coastal economies, provides an important supply of food for human societies, and is an activity of great cultural and historical importance. But fisheries have also contributed to the decline of coastal and marine ecosystems through changes in biomass and community structure, disruption of food webs, and alteration of habitats. Using the Chesapeake Bay as a model system, we are addressing fisheries issues including the impacts of harvest, restoration, and conservation on populations, communities and ecosystems, habitat use, migrations and connectivity with other coastal ecosystems. To learn more about our fisheries ecology and conservation research, please visit the following webpages:

Our long-term studies of fish and invertebrate communities in the Rhode River, Maryland study site offer a window in the community structure and population dynamics of fish and invertebrate communities in one of the most productive ecosystems on earth, the Chesapeake Bay. Spanning more than three decades, this research tracks seasonal, annual, and decadal variation in species composition and abundance of fishes and macro-invertebrates. Sampling methods include trawling, seining, a fish weir, benthic infauna cores, and tethering experiments. The long-term descriptive data, in combination with our experimental studies, provide an unusual database for exploring populations, communities, predator-prey relationships, impacts of fisheries, and impacts of environmental variability and climate change, and other ecological processes. To learn more about our long-term research, please follow the links below:

Many species on the planet migrate during their lifetime, using different habitats during specific life stages. What habitats are most important and why? How will climate change affect migrations? What are the benefits and costs of migration to individuals? How can we best manage fisheries for migratory species? How do migratory species affect community structure and ecological processes? To learn more about our Movement of Life Initiative research, please visit our Movement of Life Initiative webpage:

Welcome to the Educator Resources page-- below are a collection of lessons, web resources, and videos arranged by subject to help you quickly find resources in your interest area to create lesson plans or activities. Maryland follows the Next Generation Science Standards for K-12 science content standards. Access the Next Generation Science Standards broken down by topic at the National Science Teachers Association website.

Are you a teacher visiting SERC? Click here to learn more about how to prepare for your field trip to our campus and other general resources!

For more information about shark migration, check out Smithsonian's Movement of Life Initiative!

Video: SERC Ecosystems on the Edge video by one of our scientists, called “Blue Crabs: Top Predator in Peril”
Grades 3-8
https://ecosystemsontheedge.org/top-predator/

Video: Determining the Resiliency of Juvenile Oysters in the Chesapeake Bay
Grade 3-8