Alewife (Alosa pseudoharengus) and Blueback Herring (Alosa aestivalis), collectively referred to as river herring, are anadromous fish living much of their life in the ocean but which migrate to freshwater to spawn in the same streams they were born in. In the Chesapeake Bay region, Alewife begin their spawning runs in late February and early March with Blueback Herring appearing in April. Historically, river herring supported a highly valuable fishery along the Atlantic Coast of North America and were an important component of coastal food webs. Over the past few decades, river herring populations have declined by more than 90% due to habitat loss, overfishing, pollution and other threats like declining water quality, alteration of physical characteristics of streams, and issues related to climate change. We work with federal, state, academic and NGO partners to document and monitor river herring spawning in the Chesapeake Bay in an effort to conserve and restore this once prosperous and important forage fish and fishery. We also hope to understand how different land uses along streams and in watersheds affect how river herring use these spawning streams.

Our approach:
We’re documenting the presence or absence of river herring in the major tributaries of the Chesapeake Bay, and in those tributaries where we find river herring we’re using sonar, animal tracking, and environmental DNA technology, along with traditional biological sampling, to study population dynamics. We combine these data with maps of land cover, topography, and stream networks to quantify the land uses associated with river herring presence in streams. We can examine the land near a fish survey point, the land along the stream that the herring swam up to reach the survey location, and the watershed that drains to the survey location. We use statistical models to understand how these measures relate to river herring habitat use and to predict how likely river herring are to be present in other streams.

We and our partners have traveled to over 200 sites in twelve Chesapeake Bay tributaries in Maryland and Virginia during spring in 2015 and 2016 to assess the presence or absence of river herring. We catch and release adult fish when possible to confirm the species, collect an ichthyoplankton (fish eggs and larvae), and collect a water sample for detecting the presence of river herring DNA.

We collect ichthyoplankton (fish eggs and larvae) samples using a plankton net. These samples are sorted in the lab using a dissecting scope to determine the presence and abundance of river herring eggs and larvae.

We collect water samples at all of our river herring sites. With Dr. Louis Plough at the UMCES Horn Point Laboratory, we are developing a tool to detect the presence and relative abundance of river herring DNA in water samples. This method has great potential to increase the efficiency and reduce the cost of monitoring river herring spawning populations. 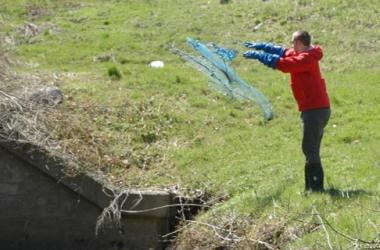 Casting a net for adult herring. 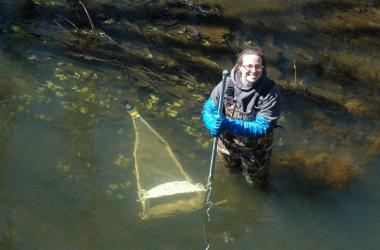 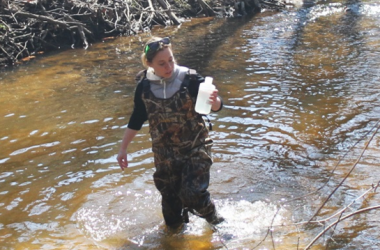 We are working to understand the population status of River Herring spawning runs in tributaries of Chesapeake Bay. To do this, we are counting fish in spawning streams using Dual-frequency Identification Sonar (DIDSON), also known as imaging sonar, to determine population size. This cutting-edge technology allows us to record and count adult fish in both clear and turbid water as they swim past a sonar station during their spawning runs. It also allows us to sample throughout the day and night without having to be present on site. See below for an example of what a DIDSON video looks like.

What are you seeing in the DIDSON video above? You are essentially looking down on the stream from above. The brightest spots that you see, if you notice, are not moving. Those are rocks on the bottom of the river bed. Each of the moving, short, bright lines is a fish. Dark spots that are moving are shadows cast by the fish. The fish moving from right to left are swimming upstream. We know that these fish are Alewife because we caught several and visually identified them at the site.

We also sample for fish using fyke nets or electrofishing to determine which species we are counting in DIDSON videos and to study the sex and age distributions of the population.

Our work on River Herring will help contribute to an important body of research needed to direct efforts to restore herring populations to what they once were.

We’d like to give special thanks to all of the land-owners who gave us permission to access streams on their property. Your assistance is helping to make our project a success.

We also thank all of the volunteers and citizen scientists who have helped us with this study. Your role is important to the success of understanding spawning requirements and population dynamics of river herring. From field sampling and data collection, to processing samples in the lab, your role is vital in helping us achieve our conservation and restoration goals.

SERC's Citizen Scientists are critical participants in our habitat use sampling program, both in the field and in the lab. If you are interested in this project and want to contribute, please consider becoming a citizen scientist. Visit the River Herring Citizen Science page for information about the citizen science aspect of this study and how to sign up.

We want to understand how land use affects habitat for migratory herring in the Chesapeake Bay watershed.

River herring is a collective name for two species of fish that live along the Atlantic coast of North America: blueback herring and alewife. Like salmon, these fish hatch from eggs in freshwater streams before migrating to the ocean. Unlike most salmon, they can return to streams to spawn many times in their lives. River herring were once plentiful and provided important food sources for humans, birds, and other fish, but there numbers have declined. We are working to understand how different land uses along streams and in watersheds affect how river herring use these spawning streams.

The Fish and Invertebrate Ecology Lab conducts stream surveys each year to observe where river herring are found in Chesapeake Bay streams (see River Herring Conservation Project).  We combine these data with maps of land cover, topography, and stream networks to quantify the land uses associated with river herring presence in streams. We can examine the land near a fish survey point, the land along the stream that the herring swam up to reach the survey location, and the watershed that drains to the survey location. We use statistical models to understand how these measures relate to river herring habitat use and to predict how likely river herring are to be present in other streams.