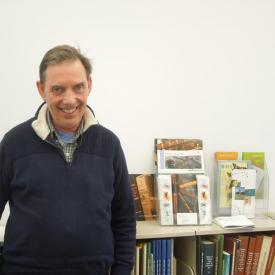 I was born in Providence, Rhode Island, and subsequently lived in England and Canada (Vancouver Island, British Columbia), before my family moved to Woods Hole, Massachusetts.  My dad was an oceanographer, and I developed a strong interest in living things on land and water.  I attended Clark University, in Worcester, MA, majoring in biology.  I then went to the University of Rhode Island, and received an M.S. in Zoology, studying fishes, in 1980.  After that, I worked as a technician, first for the National Marine Fisheries Service, and later for the URI Graduate School of Oceanography, both in Narragansett RI, identifying zooplankton. I became a part-time, and then a full-time student in Biological Oceanography, studying plankton biology.  My major professor was Theodore Smayda.  I as a zoologist in a phytoplankton lab, I studied a little-known, but abundant group of plankton crustaceans, marine cladocerans, but acquired a broader knowledge of phytoplankton and benthic organisms. Our laboratory’s interests included harmful algal blooms and the transport of plankton in ballast water.  I received my Ph.D. in 1994, and was hired by Greg Ruiz, to work in his developing Marine Invasions Program at SERC.

Initially, much of my work was identifying zooplankton and benthic critters on fouling plates, but my work shifted to developing databases on non-indigenous species, first on Chesapeake Bay, and then for the coastal waters and estuaries of North America, and most recently for the state of California.  Greg gave this set of databases the acronym NEMESIS (National Estuarine and Marine Exotic Species Information System).  This database is available to the public at: http://invasions.si.edu/nemesis/index.jsp .  This has been a fascinating project, involving collecting information on more than 500 species of animals, algae, and others, introduced to the coastal waters of the US and Canada.  Many people have been involved in this project, including Christina Simkanin, in writing and editing, Brian Steves, in database design, Jim Carlton, for information and inspiration, many other scientists for information on their favorite creatures, Smithsonian librarians, and many Invasions folks for all kinds of help.

Outside of work hours, I indulge my interests in nature on land and water by hiking, birding, kayaking, and learning about the plants and critters around us.  I particularly enjoy leading people on walks, hikes, and paddling trips, where I can show people plants and animals, and talk about the relations of plants, animals, and humans on the land and in the water.  I regularly lead some of these trips at SERC, but also enjoy exploring the Bay, its rivers, and the surrounding mountains.