On a small strip of land between Bolinas Lagoon and the Pacific Ocean lies the community of Seadrift, a community battling introduced crabs that have taken over their lagoon. Seadrift is a small subdivision at the northern tip of Stinson Beach, CA surrounding a small enclosure called the Seadrift Lagoon, an artificial lagoon created for the subdivision. Water to the lagoon comes from Bolinas Lagoon through a managed intake near the northwestern end and an outfall, also to Bolinas Lagoon, on the southeastern end. The community attracts numerous visitors and seasonal residents and the lagoon provides a place for recreational enjoyment for the entire community.

In the early 1990s an unwelcomed visitor, the European Green Crab (Carcinus maenas), took up residency in both Bolinas and Seadrift Lagoons. European Green Crabs are native to Western Europe and Africa but have invaded many regions around the world, reaching high population densities in parts of their invaded ranges. They are highly adaptable, voracious predators that consume animals and plants found in the intertidal area. Their diet includes commercially important species such as oysters, clams, and small Dungeness Crabs, as well as other native shore crabs and clams important for migratory shorebirds. Green crabs became established in San Francisco Bay around 1989 and spread south to Elkhorn Slough, California and north to Vancouver Island, British Columbia. Their spread along the west coast is due in part to the ability of their small planktonic larvae to move along the coast in the currents.

Since 2009, researchers from the Smithsonian Environmental Research Center (SERC), Portland State University, and the University of California, Davis have been working with community volunteers to remove the crabs. The team of volunteers includes residences of the Seadrift community as well as high school and college students and members of other research and government agencies. Kiren Niederberger, the manager of the Seadrift Association, and local home owners such as Gail Graham and others have been a critical part of our effort, providing access and assisting with our research in many ways. Volunteers venture out into the lagoon during three consecutive seasons, rain or shine, in hopes of trapping these invasive crabs. Collapsible traps are baited and laid across six transects (each approximately 150m long), with three transects on each side of the lagoon. That amounts to 90 traps set every trapping day. When the traps are collected the following day, crabs are bagged and frozen, then donated to Gospel Flat Farm, a local farm in Bolinas CA where they become compost. We have been told by the farm owners that the green crabs make for great crop fertilizer due to the large amounts of calcium in their exoskeleton combined with nitrogen in the tissue. 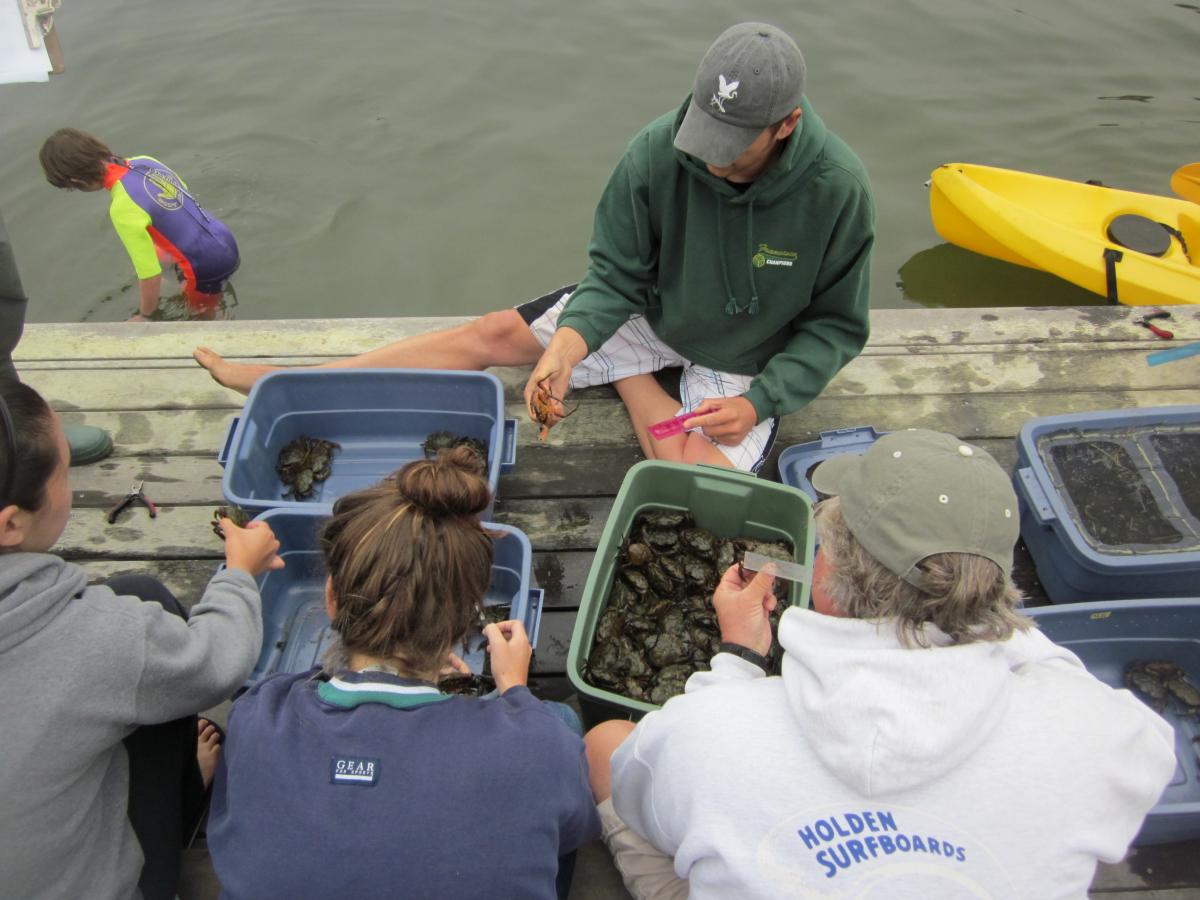 For Gail Graham “volunteering to help with the European Green Crab removal from the Seadrift Lagoon was like a combo history and Marine biology lesson. Chris Brown (SERC) and his interns were great teachers, incorporating the volunteers into the heart of the effort to catch, measure, document and eliminate many thousands of crabs. I especially appreciated the humane and sustainable approach to removal as well as the camaraderie and the feeling that we were contributing to the support and survival of our local indigenous species.”

Since 2009 we have removed over 57,600 crabs from the lagoon and have seen a significant decrease in our catch per unit effort indicating some success in bringing down the population. In the first year volunteers and staff removed over a third of the green crabs in the lagoon. Over the three year sampling period the number of crabs caught per trap dropped considerably from an average of 25 in 2009 to 8 in 2011. We have also seen an increase in the abundance of juvenile native crabs, so even without full eradication, some recovery of native species has occurred. This project demonstrates that eradication may be feasible in localized areas, such as small (new) isolated invasions.