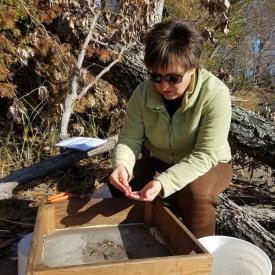 2010 to present: I manage the website including writing monthly science articles. I designed and run the Chesapeake Bay Parasite Project, a citizen science effort occurring each June and August since 2013.

2008 to 2010: I managed a large-scale ballast water verification effort in California and New Zealand. The goal was to determine if trace elements in water samples collected from the ballast tanks of arriving ships could be used to verify ballast water exchange.  I worked with enforcement officers in California and New Zealand to collect and analysis hundreds of samples.

2005 to 2008: I was a team leader on a large-scale ballast water verification project that evaluated the application and implementation of chemical tracers for ballast water exchange verification in ports and in the Pacific Ocean.  I organized and lead 23 research trips on the west coast of the United States, Canada, Australia, New Zealand, Hong Kong, Taiwan, and Korea.  Research cruises occurred on charter vessels as well as commercial cargo ships.