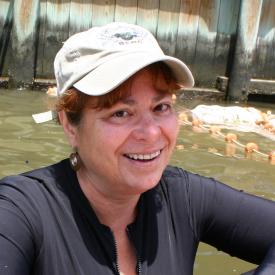 The Marine & Estuarine Ecology Lab at SERC studies interactions among species and the ways that individual animals, communities and ecosystems respond to changes in the environment. We are fascinated by the complexity of natural systems, but have also focused much of our research on the consequences of the ways that human activities have altered our natural environment. We are particularly interested in how responses of individual organisms and variation among species shape the patterns we see over large spatial scales and in complex biological assemblages.

For the past 30 years we have studied the responses of fish, jellyfish and oysters to hypoxia (low dissolved oxygen) that results from increased nutrient loads to coastal waters and is worsening with increasing global temperatures. Our research has shown that the responses of these animals can play a major role in determining not only the survival of individuals, but also how and where species occur and interact, and their susceptibility to disease.  More recently we have begun studying the spatial patterns and effects of acidification both alone and in combination with low oxygen. Deoxygenation (the loss of oxygen) and acidification share common causes, and whether an animal is in a few meters of water in a nutrient-rich estuary or in an oxygen minimum region of the deep sea, it will often experience both of these ‘stressors’ together.

Our ecosystems and the organisms within them are exposed to a multitude of stressors that result from both human activities and natural variability, and our best hope for understanding, managing, and restoring these systems lies in considering the complexity of ecological systems in the context of the complex ways we have altered the environment. Most of our research is conducted in Chesapeake Bay and its tributaries, but we have also worked in mangrove islands in Belize and Panama, and have used cross-system comparisons to uncover global patterns.

Land Use and Shoreline Hardening

Human population growth and rising sea levels have led to dramatic changes in ecosystems at the land-water interface. Forests have been replaced with housing, agriculture, and industries that increase nutrient, sediment, and contaminant loads to adjacent waters. Natural shorelines have been reinforced with stone riprap and bulkheads to slow erosion. And native vegetation is increasingly replaced with invasive species that may not provide the same benefits within the nearshore ecosystem.

Our lab has conducted extensive sampling efforts and field experiments and has led an analysis of data from multiple partner agencies and universities to better understand how these changes in land use and shoreline structure affect nearshore fish, crab and jellyfish populations. Our results show that nearshore wetlands are associated with high abundances of many economically and ecologically important species, but that hardened shorelines—and sometimes extensive agriculture—are associated with reduced abundances. Shoreline hardening that uses stone riprap may also increase jellyfish populations by providing overwintering habitat for the small polyp stage that requires hard substrate for survival.

To learn more about this research project, visit our project page.

Multiple Stressors in Estuaries and the Global Ocean

Oxygen is fundamental to life. This is true whether we consider people on land or the majority of animals and plants in estuaries, coastal waters and the open ocean. Hypoxia (low dissolved oxygen concentrations) or deoxygenation (the decline in dissolved oxygen concentrations) occurs when oxygen consumption by organisms through respiration exceeds oxygen production through photosynthesis by phytoplankton and aquatic plants, as well as mixing or diffusion of atmospheric oxygen into the water.

Nutrients from agriculture, human waste and other sources cause hypoxia through a multi-step process. Initially, these nutrients stimulate production of phytoplankton just as fertilizers stimulate growth of grass on lawns and agricultural crops on farms. However, the phytoplankton produced exceeds what other organisms can consume, and the excess, dying phytoplankton sink into bottom waters where respiring microbes deplete the water of oxygen as they decompose this bounty. The invention and use of chemical fertilizers and growing human populations have led to an explosive increase in the number of sites around the world that experience hypoxia.

Global warming, acidification and deoxygenation are all linked. Like hypoxia, acidification results from respiration by plants and animals in our oceans and coastal waters because respiration that consumes oxygen also produces carbon dioxide, which acidifies water. In addition, increasing atmospheric carbon dioxide acidifies as it dissolves in oceans and coastal waters. Increasing atmospheric carbon dioxide also causes global warming, which increases respiration rates of organisms, and thus, oxygen depletion and carbon dioxide release into waters. Finally, warming of surface waters increases the difference in density between surface and deeper water layers, which reduces contact between subsurface waters and the oxygen-rich atmosphere.

Visit our hypoxia and acidification project page and our oysters and multiple stressors project page to learn more.

Ensuring that fisheries are sustainable and continue to produce yields for future generations is a critical topic in marine ecology. In the Marine Ecology lab at SERC, we conduct ongoing research on Eastern oysters to see how they are affected by environmental stressors, with the aim of sharing our results with stakeholders in the oyster fishery: fishermen, restoration ecologists, and aquaculture facility managers. Our current project seeks to determine how oysters exposed to stressors as juveniles grow and develop over the long term into adulthood. By measuring their growth and overall fitness over time, we can see how these exposures as juveniles impact the oysters, and provide recommendations on how restoration and aquaculture efforts can maximize their return on investment.

To learn more about this research, visit our oysters and multiple stressors project page.