When scientists look at data and graphs, they are trying to find patterns or look for things that don’t fit in with the rest of the data. When they see patterns or things that are “odd,” they try to understand what might have caused the pattern or the changes. These graphs by themselves don’t tell us what caused that change, they just give us a way to look at the data and begin to ask questions. As a scientist, you have to come up with possible explanations that you can test.

The graphs below are an example of how you can look at and interpret the data that are collected by the stream data. Take a look at the graphs and explanations below!

Salinity in the Watts Branch Stream Through Time 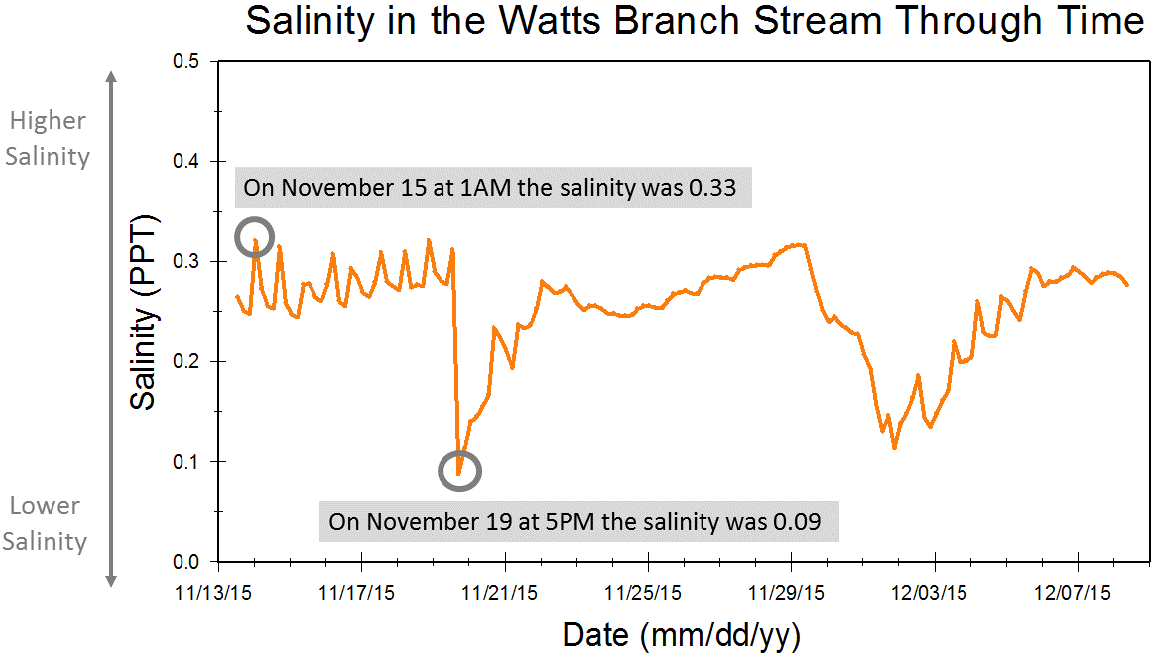 This graph shows how salinity (measured as conductivity) in the Watts Branch Stream changes over time. The orange line indicates changes in salinity between November 13 and December 9. The closer the point is to the bottom of the graph, the lower the salinity. A higher point in the graph indicates an increase in salinity. Notice the dip on November 19. Do you have any ideas why the salinity may have dropped so suddenly?

One possible explanation for the low salinity on November 19 could be heavy rainfall. First, let’s take a look at another graph. 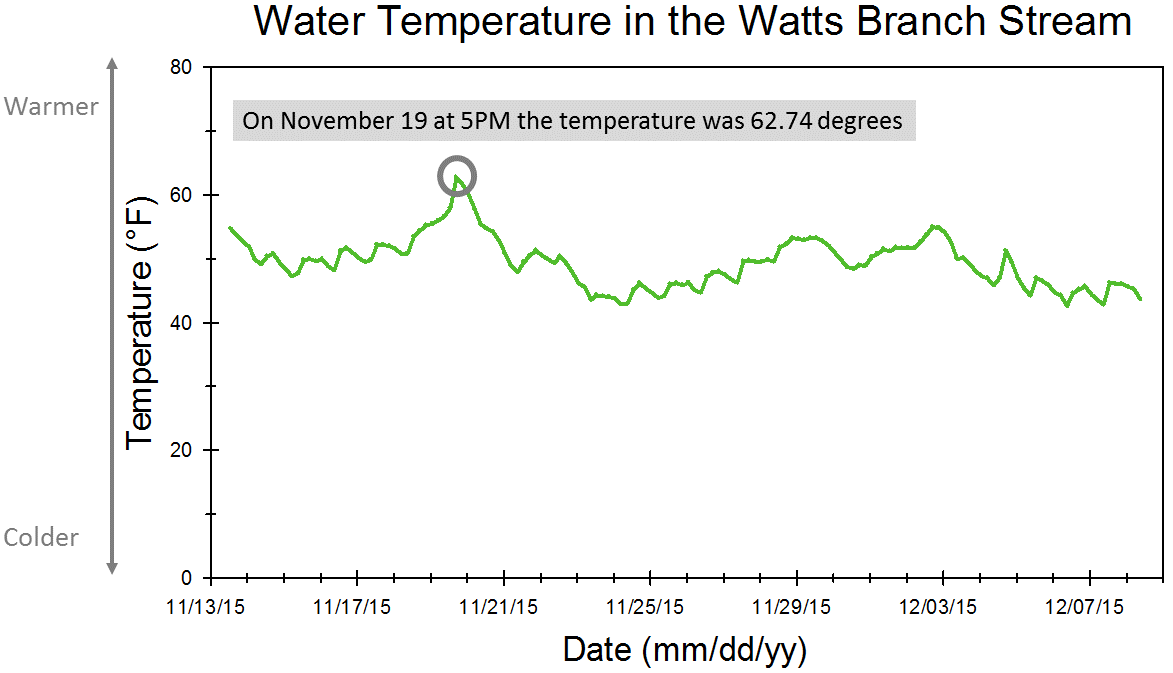 This makes sense because temperature and salinity are related! If rain comes down on warm areas such as pavement (which holds heat), the water will warm up. The warm water will then run off into a stream, increasing the temperature of the stream, as well as diluting it.

So, our possible explanation is that there was heavy rainfall on November 19, but we didn’t collect any information about rainfall. Fortunately, there are lots of other groups who collect data, and we could look up data about rainfall from somewhere like NOAA’s Climate Data Tool to see if there is evidence to support our explanation. By checking the rainfall data, we can see that indeed, it did rain on November 19, 2015 in the area of Washington DC around Watts Branch.

Let’s look and see if there is any evidence of the November 19th rain event in the air temperature data. 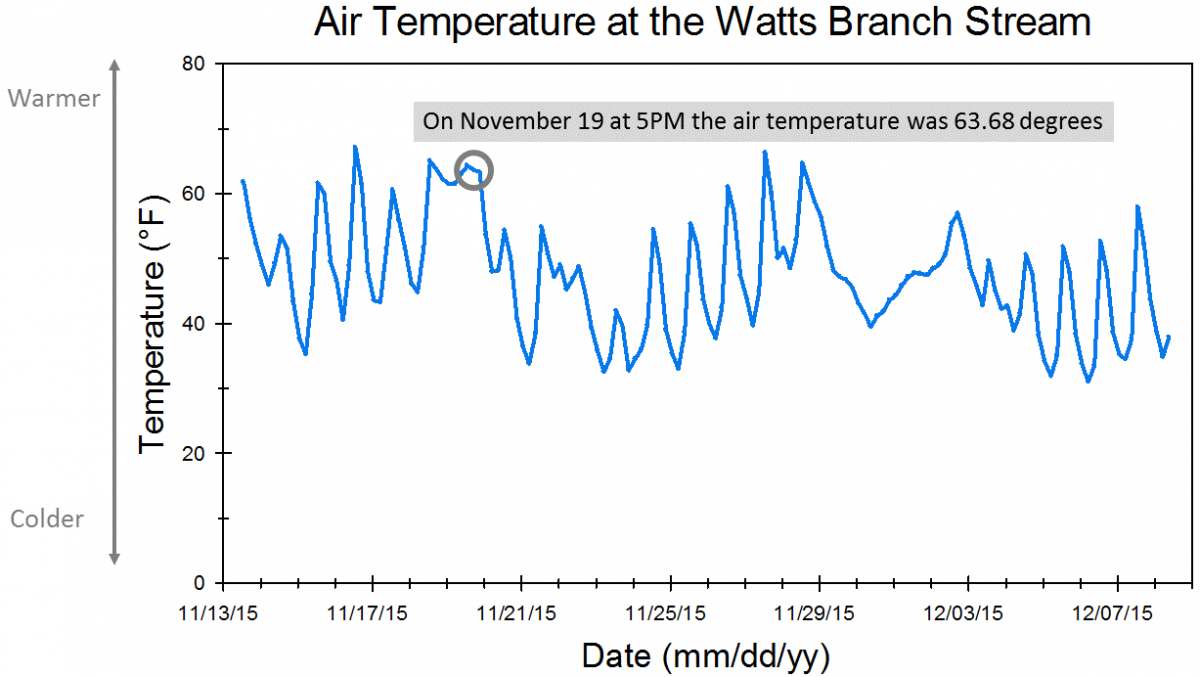 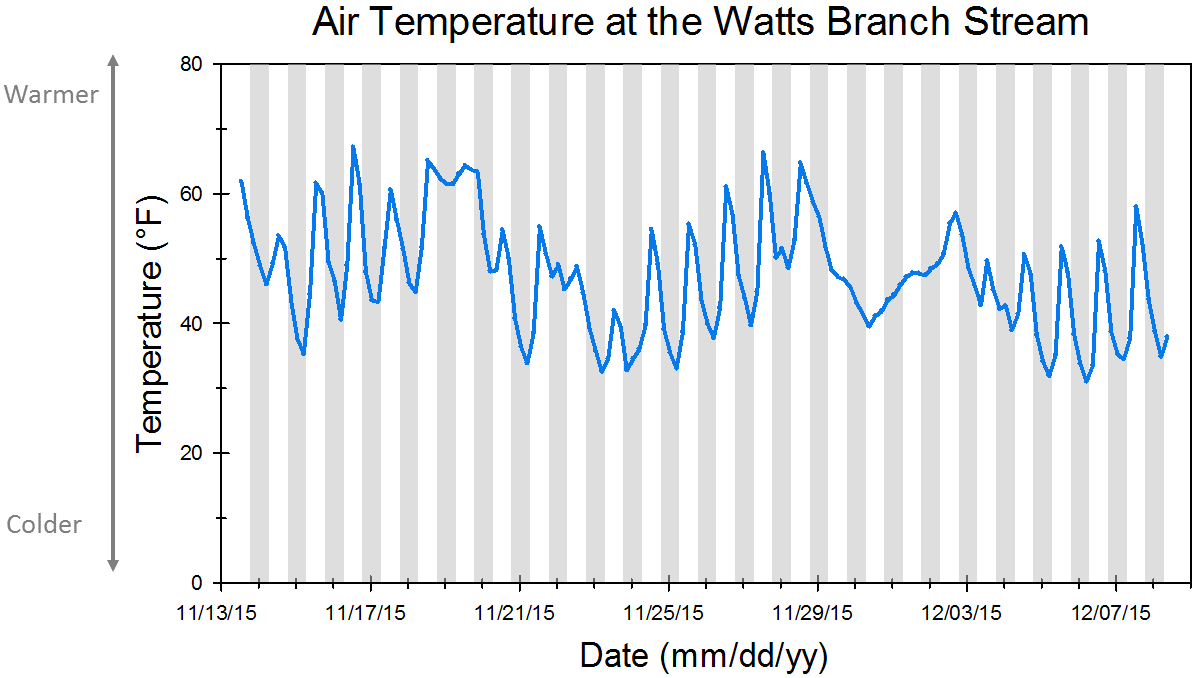 It is also important to consider whether or not our explanations make sense. It makes sense that rain would cause a decrease in salinity because we are adding more fresh water, so the stream is more diluted. It would also make sense that water that had come off of the warm land (especially in urban areas with lots of pavement) would heat up the stream, so we would see increased water temperature. And, we know that in general, air temperatures are warmer during the day than during the night, so our explanation for the pattern in the air temperature makes sense too. But, analyzing our data also leads to some more questions, which is great because doing science is all about asking good questions! So, why didn’t we see a change in the air temperature with the November 19 rain event like we saw changes in water temperature in salinity? We can use our data and some outside information to explore this further.

A good way to start exploring this question might be to look at air temperature and water temperature on the same graph.

Water AND Air Temperature at the Watts Branch Stream 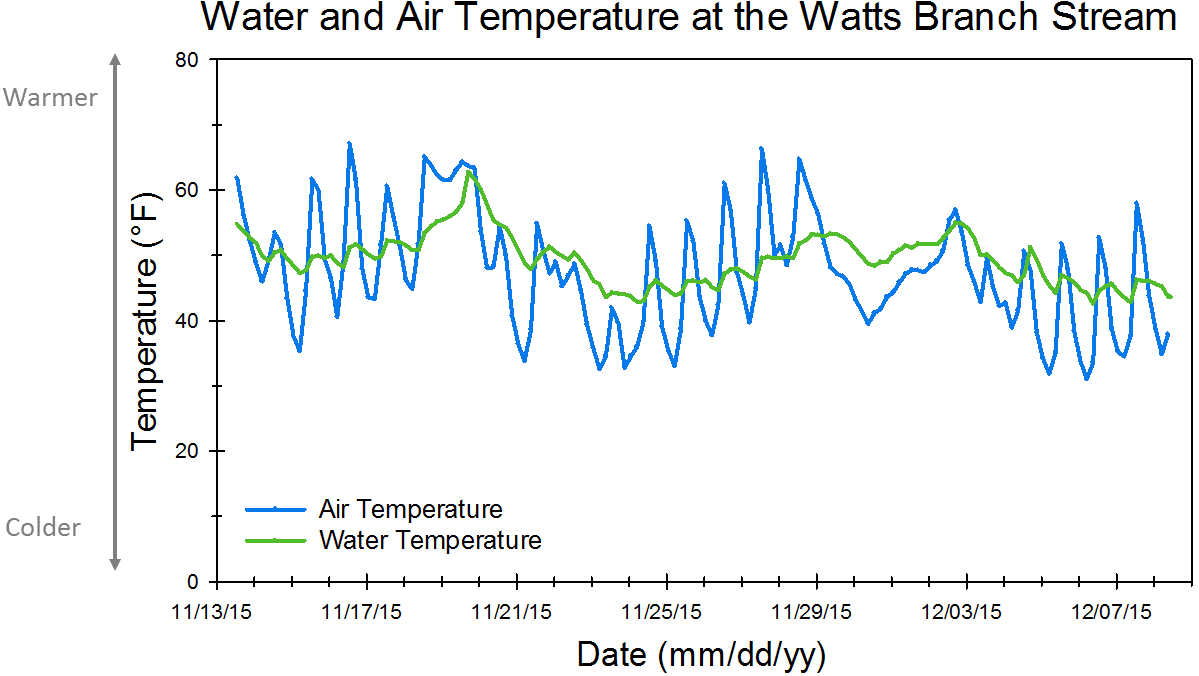