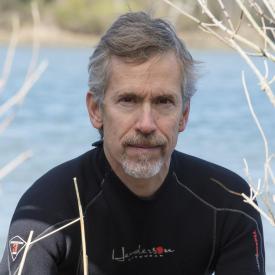 Emmett Duffy is Director of the Smithsonian’s Tennenbaum Marine Observatories Network, which coordinates the developing MarineGEO program. MarineGEO is building a worldwide partnership to administer an annual health exam for coastal marine life: documenting how and why coastal sea life is changing, and how that change affects resilience of the marine ecosystems humans depend on. The research focuses on biological diversity as the heart of healthy marine ecosystems and how they respond together to global change. Duffy is a marine biologist who has worked in seagrass and coral reef ecosystems around the world. He has contributed to scientific syntheses linking biodiversity to ecosystem health, the US National Climate Assessment, and visioning for development of an international Marine Biodiversity Observation Network. He was awarded an Aldo Leopold Leadership Fellowship in 2006, Japan’s inaugural Kobe Prize in Marine Biology in 2011, and a Virginia Outstanding Faculty award in 2013. Duffy came to the Smithsonian in 2013 after 19 years at the College of William and Mary’s Virginia Institute of Marine Science.