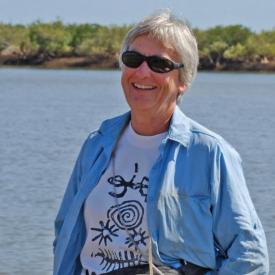 Nutrient Availability and Eutrophication in a Belize Mangrove Ecosystem 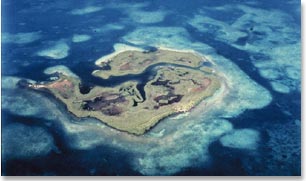 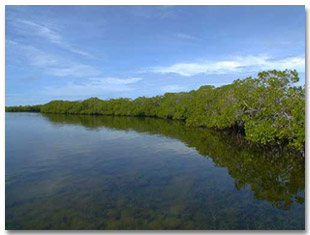 Responses by the red mangrove (Rhizophora mangle) indicated that growth is nitrogen (N) -limited in the fringe but phosphorus (P) -limited in the dwarf forests that dominate the interior of these islands. Trees in the transition zone between these two areas responded to both N and P. Although the largest responses occurred to P enrichment in the dwarf and transition zones, N enrichment had a highly significant effect on growth of both fringe and transition zone trees after 2 years of treatment.
For herbivory, leaf damage was significantly lower in the dwarf zone than either the fringe or transition zones. This pattern was related to the distribution of the mangrove tree crab Aratus pisonii rather that to differences in nutrient availability.
In contrast, the frequency of gracillarid miners increased in P-fertilized trees in the dwarf and transition zones and N-fertilized trees in the fringe and transitions zones. Phosphorus availability also had significant effects on decomposition, internal nutrient cycling, and the efficiency of nutrient conservation mechanism.
This study demonstrates that essential nutrients are not uniformly distributed within mangrove ecosystems and that soil fertility can switch from conditions of N to P limitation across narrow ecotonal gradients in R. mangle forests. In addition, our data indicate that not all ecological processes, (e.g., growth, decomposition, nutrient cycling, herbivory) respond similarly to, or are limited by, the same nutrient.