Tracking Cownose Rays to Improve Understanding of Behavior and Migration 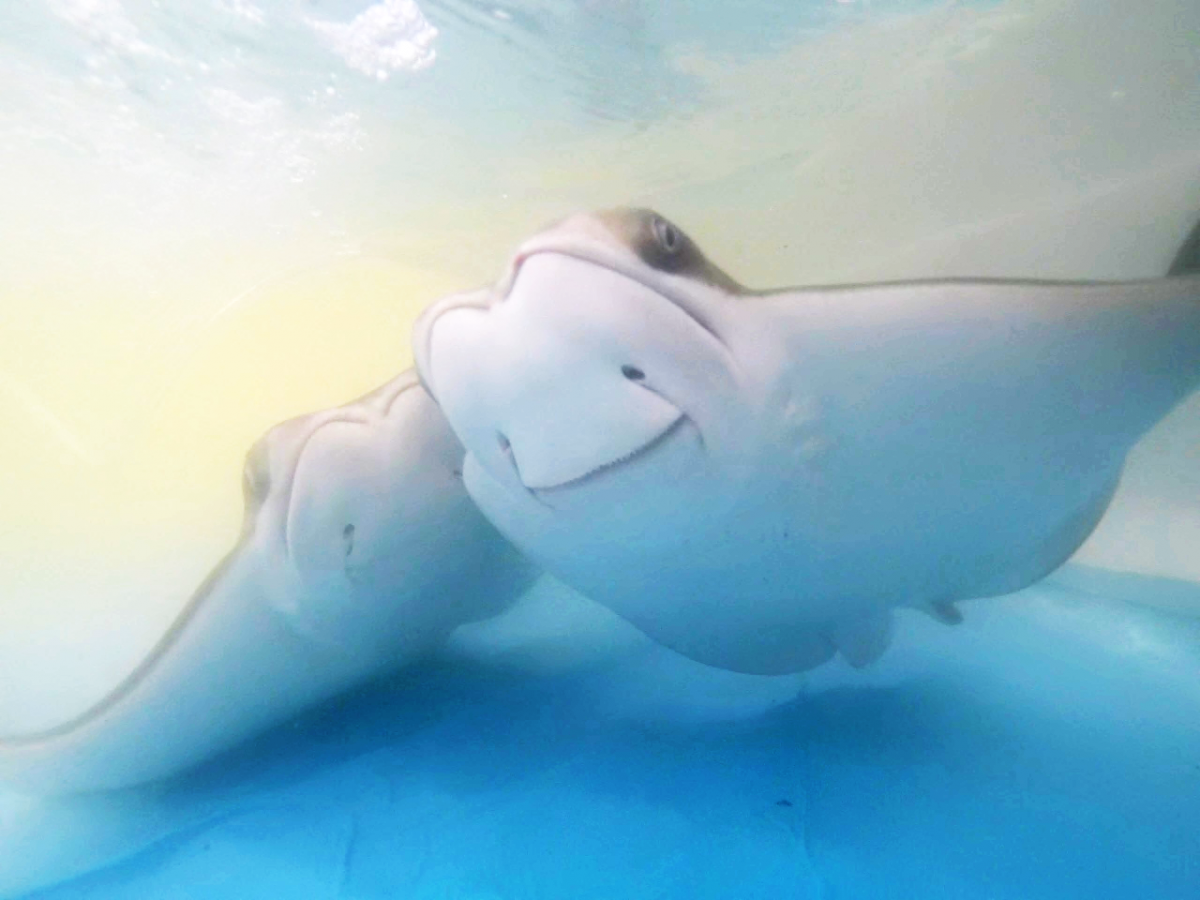 Cownose rays (Rhinoptera bonasus), are a migratory species of eagle ray.  They live in large schools near the surface of shallow waters and have flat teeth that they use to crush and eat mollusks.  They are native to the Chesapeake Bay, which is their primary nursery habitat during the summer.  Cownose rays enter the Bay in May, give birth to free-swimming offspring (called a "pup") in June, mate in July, and leave the Bay by October to return to their wintering grounds.

Recently, it is thought that their populations may be higher than historical abundances.  This may be due to the drastic decline of populations of large predatory sharks as a result of over fishing along the US Atlantic coast.  The decline in sharks means that top-town control of near-shore food webs has shifted to "mesopredators" (such as the cownose ray), which are predators that feed on bottom-dwelling prey.  In the Chesapeake Bay, there has been concern over the cascading impacts an increase in cownose ray abundance may have, such as by feeding on bivalve mollusks and disrupting bottom sediments and seagrass beds. For this reason, there has been an interest in creating a targeted fishery to reduce the impacts of cownose rays on Chesapeake Bay ecosystems, especially oyster and clam aquaculture, oyster restoration, and seagrass habitats.

However, cownose rays are highly susceptible to over-fishing due to the fact that they are slow-growing and give birth to only a single offspring every year.  They've been designated as "near-threatened" on the IUCN Red List for this reason.

Currently, it is unknown whether the cownose rays that visit the Chesapeake Bay every year are part of a local, regional, or coast-wide population.  It is also unknown how they move throughout the Bay in a given season.  Our project aims at improving understanding of cownose ray behavior, particularly about individuals' habitat use and migration, to help inform the design of a successful and sustainable cownose ray fishery.

The main questions we hope to answer during our study are:

1) To what extent do individual cownose rays remain within or move between major subestuaries of the Chesapeake Bay?

2) Do males and females reside in subestuaries for different amounts of time?

3) Are there short-term patterns in movements of individuals associated with the diel or tidal cycles?

4) Do individuals have a tendency to stick with the same schools?

5) Do males leave the Chesapeake Bay immediately after mating? Do females remain until early October?

6) Are there sex-specific differences in the timing or route of seasonal migrations south to wintering grounds?

7) Do individuals return to the same areas in summer in multiples years?

We hope to be able to answer our study questions with the help of passive acoustic telemetry.  Catching cownose rays to tag can be a tricky business.  Therefore, in order to tag cownose rays, we ask local watermen for help.  Local watermen catch rays unintentionally in their pound nets, which makes it easier for us to scoop them up and get them to the shore, where they're put into a holding tank until its time to surgically implant an acoustic tag.  One at a time, each ray is sedated with an anesthetic, put in a special surgery bin in which they're face can be in water (so they can breath!) while their body is out and accessible to insert an acoustic transmitter.  After the transmitter is implanted, they're put back in the holding tank, where they can wake up from the anesthesia.  After they recover from surgery, they are released back into the water.

Below is a video of some cownose rays that we tagged this summer swimming around in a holding tank.

After an individual has been tagged with an acoustic transmitter, signals can then be picked up by hydrophones at receiver stations.  Currently there are over 200 receiver stations throughout the Chesapeake Bay and there are multiple receiver arrays on the Atlantic coasts from North Carolina to Florida; these will help us track individuals as they move about the Chesapeake Bay and then migrate along the US Atlantic Coast. 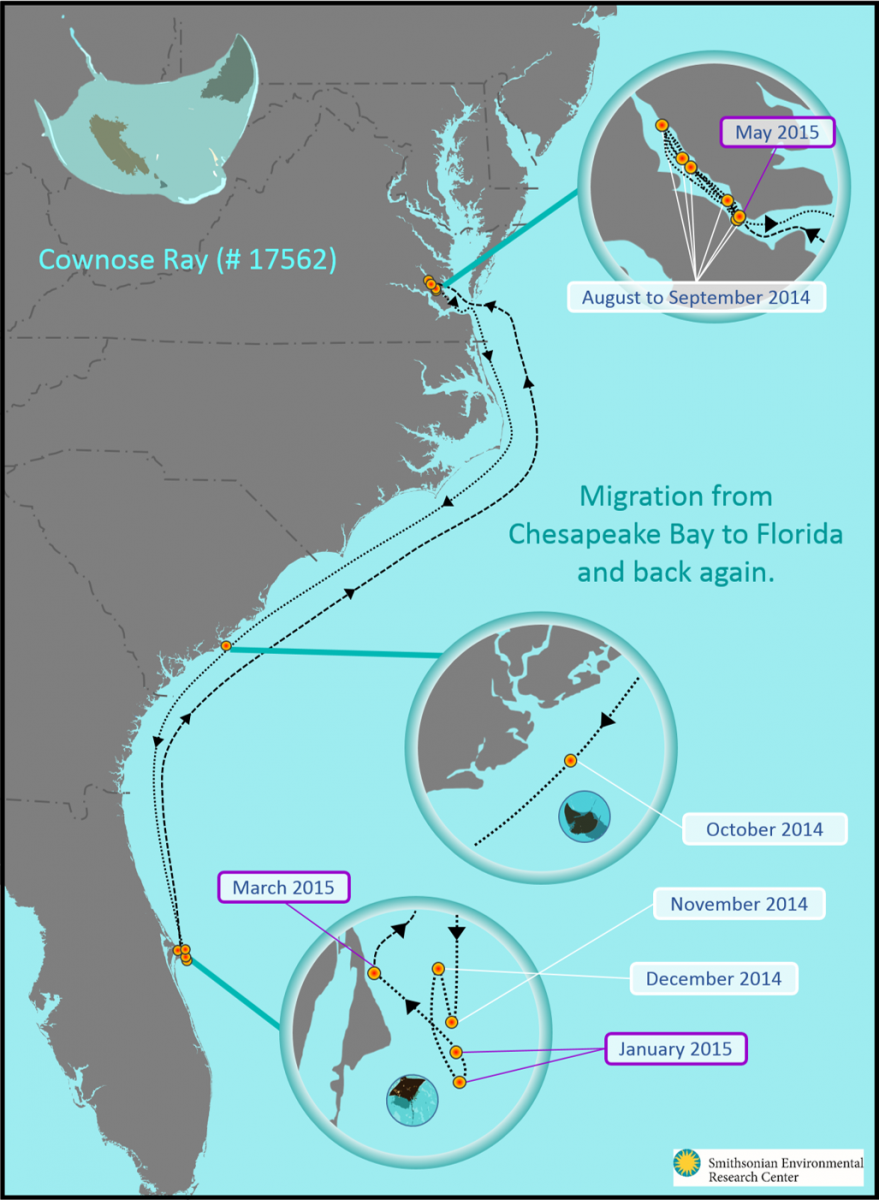 This project is currently in its second year.  So far, 35 cownose rays have been tagged, and we hope to tag at least 20 more.  Some of the rays that were tagged last summer returned to the Chesapeake Bay this spring!  This is the first recorded full migration of cownose rays from the Chesapeake Bay to their wintering grounds in Florida and back again.

To the left you can see the migration path of an individual cownose ray, #17562; this particular ray is a mature female.  This ray was tracked from the area where it was originally tagged in Virginia, down the coast, and then picked up by receivers in Florida five times between November and March.  This ray was then picked up in May in the same location where it was originally tagged in the Chesapeake Bay.